This business was conceptualized in December, 1996 and over the course of three months, the mission of a marketing survey was undertaken. It explored the potential of various product lines, as well as the usual risk and SWOT analyses were performed. In March, 1997, the company was incorporated and the ground work began in the following areas: -

All of the above took place during 1997 and BTW started production in January, 1998. Just over a year later BTW commenced fabrication of the first two wood drying kilns which were commissioned in February, 2000. The business has grown over the years in several small steps. Over the course of the next six years, additional plant & machinery were procured as well as the erection of additional factory buildings whilst expanding our customer base throughout the Caribbean.

In 2007, another wood drying kiln was commissioned and at present there are six kilns in our production line, each with a capacity of twenty cubic metres. Also, since 2012, the Company acquired two sawmills which have bolstered our production, to meet our increasing demands.

The Directors of the company are Howard Bulkan and his wife Alison Bulkan, their elder son, Justin Bulkan, and nephew, George Bulkan. 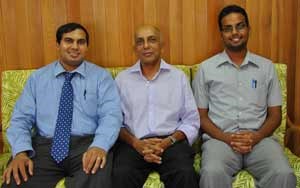 Bulkan Timber Works (and its sister company: Superior Shingles & Wood Products) over the years, since its formation, has received many notable awards both locally and regionally as a recognition of their excellence in all facets of the wood industry. The Government along with some of the country’s leading Manufacturing Associations/Agencies have seen it fit to award the Company, with these relevant prestigious honours.

It would be challenging to state individual projects as BTW has supplied globally, but generally projects where premium quality is required in territories including Virgin Gorda, the United Arab Emirates, Australia, Japan, New Zealand and most, if not all, of the English-speaking Caribbean Countries.